Italo Calvino Hall
Palazzo Squarcialupi – Santa Maria della Scala
Recently renovated, the historical Italo Calvino hall is located on the 7th level of the Santa Maria della Scala Museum Complex in Piazza del Duomo 1. The large hall can accommodate up to 290 people, this was built in the first half of the fourteenth century to accommodate, along with other spaces, the "Spedale delle donne". The hall, from which windows it is possible to admire the beautiful Cathedral, today is characterised as a properly equipped and flexible space, of great charm and particularly suitable for organising conventions and congresses. The whole building has been equipped over the years to house the main entrance to the museum, the ticket office, the bookshop, the cafeteria, exhibition and conference rooms and the Briganti library and photo library. There is a multimedia facility with wireless Internet connection available to all those present in the hall. The hall is also equipped with a video projector.

Sala Sant'Ansano
Palazzo Squarcialupi – Santa Maria della Scala
The Sant'Ansano hall is located on the fourth level of the Santa Maria della Scala Museum Complex in Piazza del Duomo 1. Its construction is the result of the thirteenth-century expansion of Santa Maria della Scala to the rear of the Sant'Ansano ditch, when the hospital faced the need for expansion by including some houses on the hillside. The aisle was in fact created from the second floor of a civil residence. The historic Sant'Ansano hall can accommodate up to 50 people seated. The space is a charming environment thanks to the attentive recovery of the niches found during the works of renovation carried out recently. It is precisely the niches which reveal the use of the hall as a hospital aisle since the end of the sixteenth century. There is a multimedia station with wireless Internet connection available to all those present The hall is also equipped with a video projector.

Loggia dei Nove
Palazzo Pubblico
The Loggia dei Nove is located on the fourth floor of Palazzo Pubblico, in Piazza del Campo, 1. A unique and suggestive space which can be accessed from the entrance of the historic Palazzo Pubblico, from a staircase embellished with a fresco of a Madonna di Neroccio by Bartolomeo Landi from 1481, one ascends into the Loggia, supported by four pillars, which overlooks the extraordinary view of Piazza del Mercato and the southern part of the city. The Loggia dates back to 1348 and had the function of giving a moment of recreation to the Nine Regents that were forbidden to leave the palace, except on public holidays. In 1904, large original fragments of Jacopo della Quercia's Fonte Gaia were placed in the Loggia, now placed in the Santa Maria della Scala complex. From the Loggia a door opens into the hall of the Captain of the People. Loggia, also being used for ceremonies and weddings, offers a flexible space for several uses, such as small receptions and buffets.

Cortile del Podestà
Palazzo Pubblico
The splendid Cortile del Podestà, is a place of unique and extraordinary attraction, located within the Palazzo Pubblico, in Piazza del Campo 1. The Courtyard consists of an elegant brick-built colonnade on which stands a floor with large three-light pointed arch windows. Here, one can see the remains of the stone statue of Mangia, the ancient guardian and bell ringer from which the famous Torre del Mangia was named. This area is suitable to accommodate small events such as exhibitions and shows, but also banquets and buffets. A unique environment, perfect for those who want to set up an event with a strong scenic impact.

Sala Convegni Palazzo Patrizi
Palazzo Patrizi
The conference room "Palazzo Patrizi" is located on the first floor of Palazzo Patrizi, an imposing building in Via di Città, 75. It is a space of about 150 square metres with 7 metres high walls decorated with recently restored ornamental elements and frescoed ceiling. The room can accommodate up to 90 people seated in comfortable armchairs equipped with a supporting board. There is a multimedia station with wireless Internet connection available to all those present The hall is also equipped with a video projector. A unique and suggestive atmosphere just a few steps from the main monuments of Siena.

Historical Hall of the Biblioteca degli Intronati
Biblioteca degli Intronati
The historical hall of the Library, located on the ground floor of the historic building located in Via della Sapienza 5, is a perfect location for conventions and conferences. The beauty of the Hall has also turned it into a choice for wedding celebrations. The room has a capacity of 100 seats and a laptop PC is available connected to the microphones and the projector. 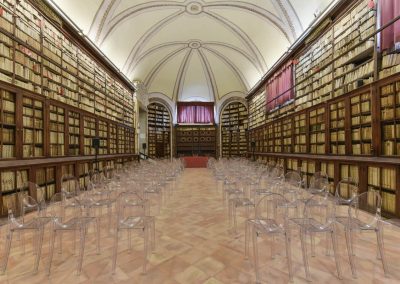 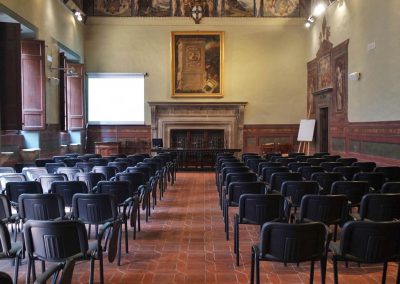 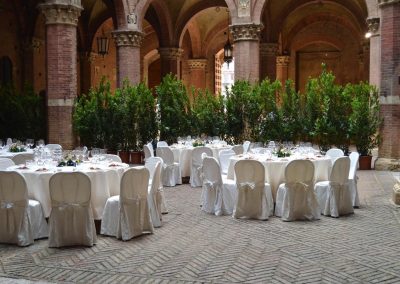 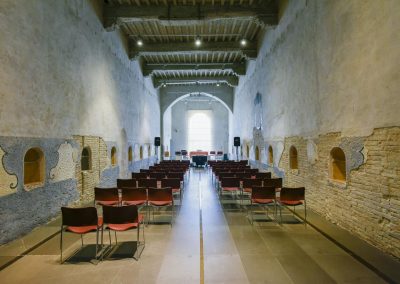 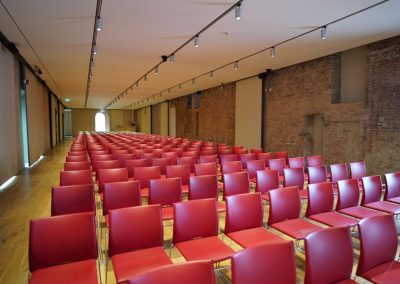 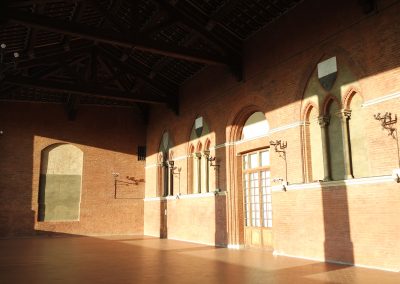