The Opera della Metropolitana di Siena, with a documented activity since 1180, is one of the oldest Italian and European institutions. Since the middle of the 13th century, the Opera seems already well defined on an institutional level as it is provided with an autonomous bureaucratic structure, a considerable real estate patrimony and an administrative headquarters. At the management level there was a Worker at the head of the administration, supported by a group of councillors and a writer with bookkeeping duties, substituted by a real treasurer (Camerlengo) starting from 1362. In 1545 the structure and functions attributed to the Opera in the fourteenth century underwent a radical change. At the head of the Opera there was a Rector, appointed by the highest city institutions and a council of nine "Savi", one of whom was chosen among the canons of the Cathedral.
The sixteenth century rules were also applied substantially throughout the modern age, although the appointment of the Rector became the prerogative of the Grand Duke of Tuscany. In the last decades of the 18th century the Grand Dukes modified the structure of the Opera several times until 1790 when the office of the Savi was suppressed and the Rector was entrusted with all administrative responsibilities, in collaboration with a balance-sheet keeper to take care of the accounting affairs and a chancellor to carry out all bureaucratic tasks. After the Unification of Italy, the Opera del Duomo of Siena, like all the other vestry boards, was subject to the legislation of the unitary State.

The Cathedral of Siena, as an expression of the spiritual dimension of the whole community, is distinguished not only by the extraordinary magnificence of the outside, but above all by the suggestive and magnificent decoration that we find inside, where all branches of figurative art are summarily represented. Nicola and Giovanni Pisano, Duccio di Buoninsegna, Donatello, Michelangelo, Pinturicchio, Domenico Beccafumi and Bernini are just examples of the artists who produced countless masterpieces in this venerated Temple. Accessing this place means raising the spirit, opening up to art and getting to know one of the most valuable treasures of the City.

“the most beautiful..., great and magnificent... ever made". This is how Giorgio Vasari defined the floor of Siena Cathedral, the result of a programme that has been carried out over the centuries, from the fourteenth to the nineteenth century.

The Piccolomini Library houses a precious cycle of frescoes which Pinturicchio painted between 1503 and 1508. A cycle of exceptional painting quality where the Master illustrated, with all the inexhaustible richness of his narrative and chromatic registers, ten episodes from the life of Pius II.

The most beautiful observation point in Siena. A breath-taking panorama. A visit to one of the most important testimonies of the city's history, defined by Enzo Carli, "the masterpiece of Sienese Gothic architecture".

The Museo dell'Opera, part of the same large group of "Duomo Vecchio" and "Duomo Nuovo" is one of the oldest private museums established in Italy. It was founded in 1869 and contains works from the cathedral and the churches of the diocese, documenting the history and artistic culture of the city of Siena. In the Museum are kept two complexes of fundamental importance for the history of Italian art: the statues which Giovanni Pisano sculpted for the façade of the Cathedral and the Majesty of Duccio di Buoninsegna made for the high altar.

A descent into the world of colour will lead you into the depths of the cathedral, into what is commonly known as the "Crypt", one of the most important archaeological discoveries of the last twenty years. Here one can admire a pictorial cycle of singular beauty created by a series of Sienese artists in the second half of the thirteenth century.

Oratory of San Bernardino and Diocesan Museum of Sacred Art

It is a place with a magical and suggestive atmosphere, able to offer a very comprehensive overview of Sienese painting production since the thirteenth century. The central core of the museum is the splendid chapel of the upper oratory where, on the walls, some early 16th century artists such as Domenico Beccafumi, Giovanni Antonio Bazzi known as "Sodoma" and Girolamo Pacchia frescoed great scenes with Stories from the Life of the Virgin. Inside the museum there is also the Madonna del latte by Ambrogio Lorenzetti, an absolute masterpiece of the 14th century painting. 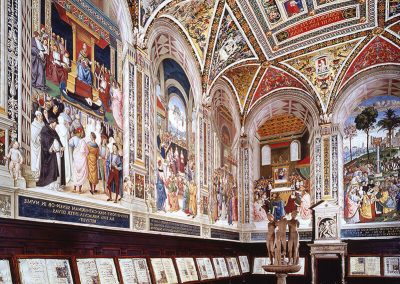 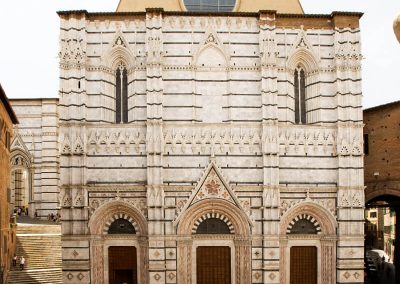 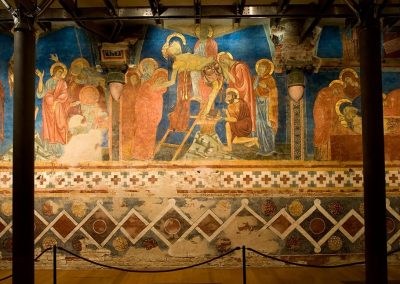 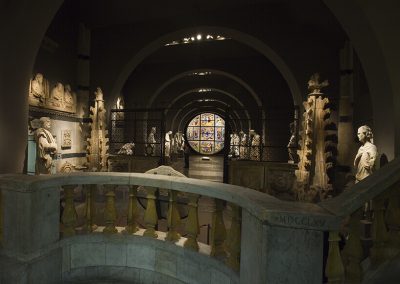 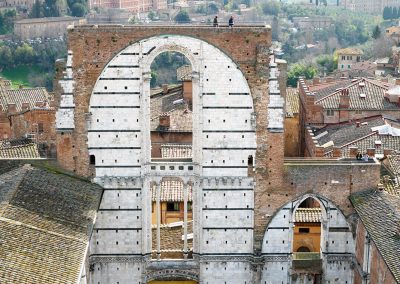 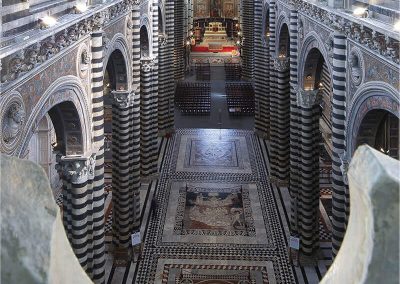 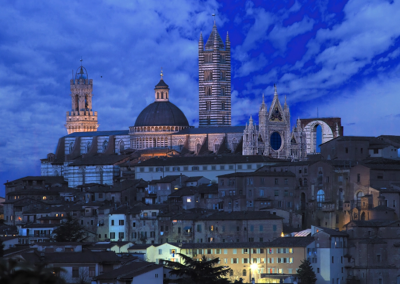